Above: Breadfruit may surprise you - prepared in a variety of ways, it has a taste and texture similar to a potato.

Hawaii’s tropical fruit, with its vivid colors and bizarre shapes, can look like food on a space alien’s dinner table: foreign, exotic, and a little scary. These curiosities intimidate unsuspecting visitors, who may avoid them. But if you don’t judge Hawaii’s fruit by its cover, we promise a bounty of fresh flavors and heavenly scents, which may cause fearless indulgence. And sometimes, knowing where your food comes from, helps.

Looking around, it’s hard to believe that tropical fruit didn’t always thrive in Hawaii, but when Polynesian voyagers docked in 400 A.D., there were but a few. In 1778, when locals greeted Captain James Cook and met Europeans for the first time, new varieties were introduced. But most of Hawaii’s exotic fruits were planted after 1835, as a new era began when the first successful sugarcane plantation opened on Kauai, and Naval officers, as well as horticulturists, brought their favorites from around the world.

When Polynesian voyagers decided to settle in Hawaii, they loaded their canoes with beneficial plants. Besides food, these Canoe Crops were used as medicine, to build canoes and shelter, and to make clothes and music. They brought five types of fruit: noni, breadfruit, coconuts, mountain apples, and bananas.

Above: Noni may not be very appetizing, but the many healing components it delivers make it a welcomed fruit.

All of these fruits can be found, in season, at farmers markets across Hawaii—except noni. That’s because the fruit smells like gym socks and tastes like blue cheese. But locals don’t eat it for pleasure. As one of the primary sources in traditional Hawaiian medicine, noni’s long list of healing aspects includes antibiotic and painkilling properties. It’s 75 percent as effective as morphine at reducing pain, and is typically sold as tonics, or fruit leather.

Breadfruit was the prized cargo in the 1962 film Mutiny on the Bounty, which was based on a real voyage in 1789. Today, just as then, the heavy fruit—weighing from two to 10 pounds—is a favorite carbohydrate of residents. The dough-like center can be compared to potatoes, with a drier texture, and are oftentimes sold as fried chips sprinkled with sea salt.

Coconuts, which are technically a nut and not a fruit, drop to the ground when ripe. That’s why you won’t see any hanging from trees on a resort’s manicured lawn. Milk is produced by shredding the hard meat of mature (brown) coconuts, soaking it in water, and straining it. Young (green) coconuts are full of water, which ancient Hawaiian priests used in divination rituals. 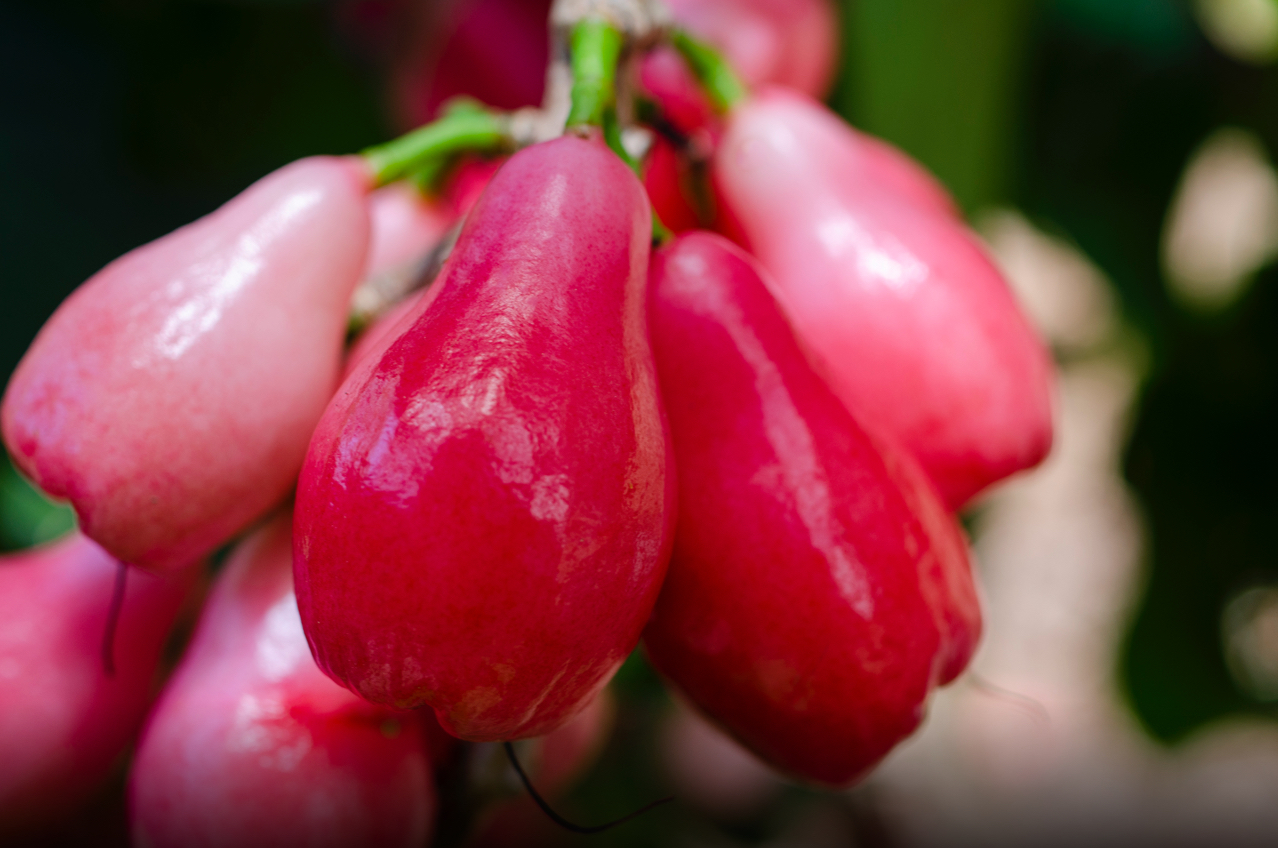 Above: You might spot these bright red mountain apples on an island hike. Don't be afraid to try a bite.

Mountain apple trees in full bloom look like something Dr. Seuss’ daughter would snooze under. Their puffball blossoms are a fiery magenta, and when their brush-like petals drop, they cover the ground in a spray of color. When ripe, the pear-shaped fruits are ruby red. The white flesh is mild in flavor, very juicy, and smells of roses. If you want to impress a local, call a mountain apple by its Hawaiian name, ʻōhiʻaʻai, pronounced “oh he ah ay.”

Originally, banana trees—which are large perennial herbs—were planted in mountain valleys on slopes above streams, where they now grow wild. When the Europeans found the Hawaiian Islands, there were 50 known varieties. Today, there are 160, and the ubiquitous apple banana is available at every farmers market and some grocery stores.

Like all fruit, exotics are harvested early and exported to grocery stores across the country. The taste, texture, and smell of imported pineapples and papayas do not compare to Hawaii’s tree-ripened tropical fruit. So even if you’ve decided you don’t have a taste for those papayas bought at your neighborhood grocery store, or that their pineapples are too acidic, give Hawaiian grown fruit another try.

Above: Apple bananas are smaller in size and have a slightly different flavor with a touch of tangy to it.

In Hawaii, you’ll find tropical fruit at Foodland, the state’s largest and oldest locally owned grocery chain, with stores across the Islands. The biggest and freshest selections can be found at the farmers markets, where fruit was harvested the day before and picked at peak ripeness. (Be sure to show up when the market opens, because the ripe ones go first and fast.) There’s a market every day of the week, any time of year, because Hawaii temperate climate enables farmers to grow year-round. Believe it or not, Hawaii has four distinct seasons, all of which produce different types of tropical fruit.

There’s no reason to feel intimidated by the exotic fruits of Hawaii. Surrender to the Islands’ sweet riches and be rewarded with juicy mouthfuls of Nature’s best candy. And with our Island Guide to Nine of Hawaii’s Tastiest Tropical Fruit, you’ll know exactly how to select and prepare the perfect bite.