The June 20th Hawaiian Airlines Liberty Challenge outrigger canoe race launches from Hudson River Park, splashes through New York Harbor and passes right by the Statue of Liberty. Even though the 15-mile course keeps you several hundred feet away from the statue, it’s so tall that some say you feel like you’re right on top of it as you glide by.

That’s something you don’t find in Hawaii.

Still, the nineteenth annual Liberty Challenge – the East Coast’s largest outrigger canoe race, which draws paddlers from all over the world – does have some things in common with Hawaii. And those commonalities are what draw people from “home,” such as Justin Gurney, Liberty Challenge co-chair.

Gurney and his wife grew up in Hawaii, where they both graduated from Kamehameha Schools. Now he works as an attorney in New York, where she’s completing a surgical residency. He says they would move back to Hawaii in a heartbeat.

“We both wake up every morning and think, ‘I want to go home,’” he says. “My family’s there, my nephews, my nieces. They’re all growing up, and they’re all going to be fifteen one day and I’m going to be, ‘Wow, where did the time go?’ I get off the airplane in Hawaii, and I think, ‘This is where I want to be.’ I love the culture, the aloha spirit, the food. I can’t see myself anywhere else.”

But paddling with New York Outrigger (NYO), the canoe club that puts on the Liberty Challenge, gives him a feeling of ohana (family) and community until they can move back.

After all, he says, the airplane is today’s wa‘a (canoe). 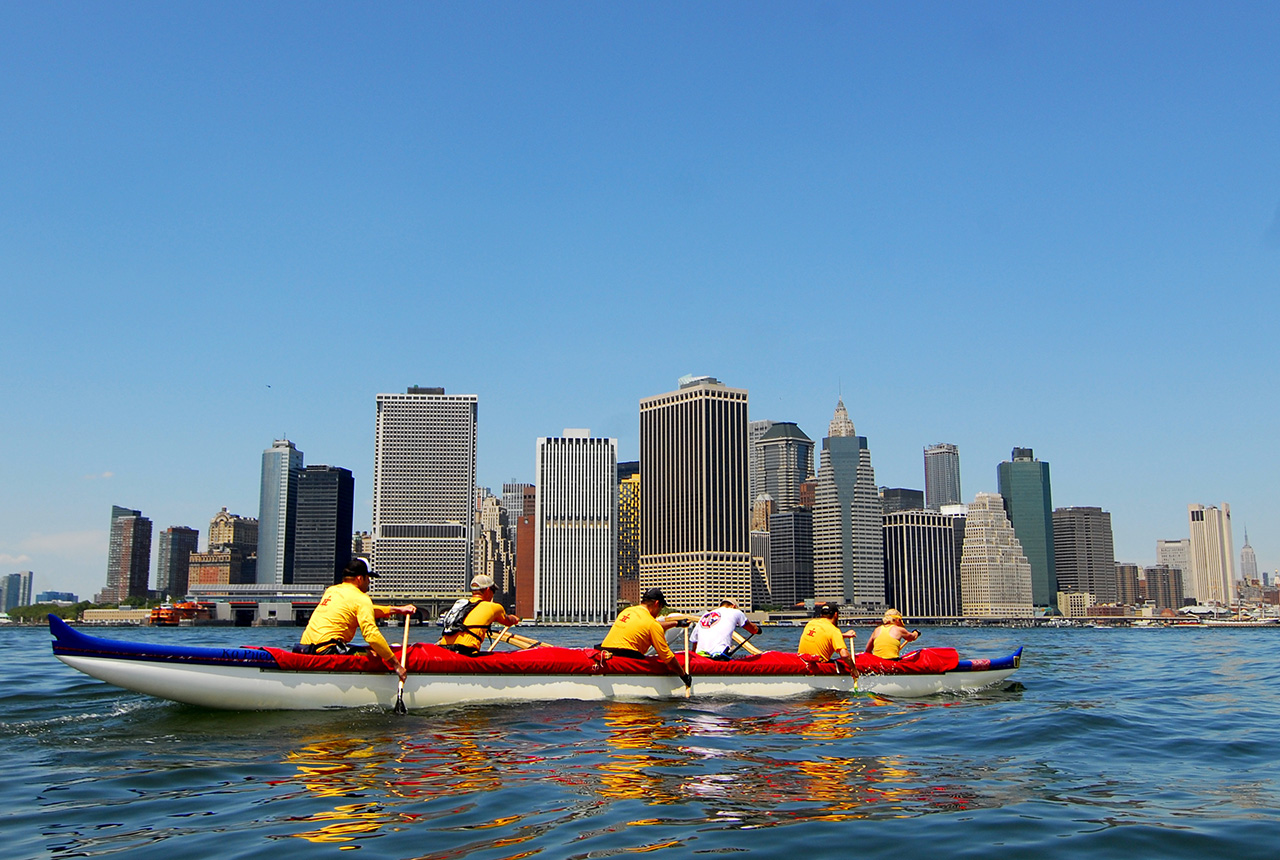 Sponsoring the Liberty Challenge is part of the airline’s overall strategy of sponsoring outrigger canoe events in iconic places on its route system. “It’s about showing people about Hawaii in many different places,” he says.

And, he explains, it’s more than just the canoe race. “The Liberty Challenge becomes the de facto Hawaii festival of the city.” The festival they put on at Pier 26 on Race Day, June 20th, will not only allow the paddlers to congregate, he says, but it also introduces New Yorkers to Hawaii.

“I think Hawaii as a concept may not be very well understood in New York. For New Yorkers, it’s cheaper, faster and more understood to take a trip to the Caribbean. Our intent is to show them how Hawaii is different.”

Hawaiian Airlines does that by bringing in a food truck, filled with Hawaii favorites, as well as Hawaiian music and hula (from both Hawaii and New York), and cultural activities for the keiki (children). 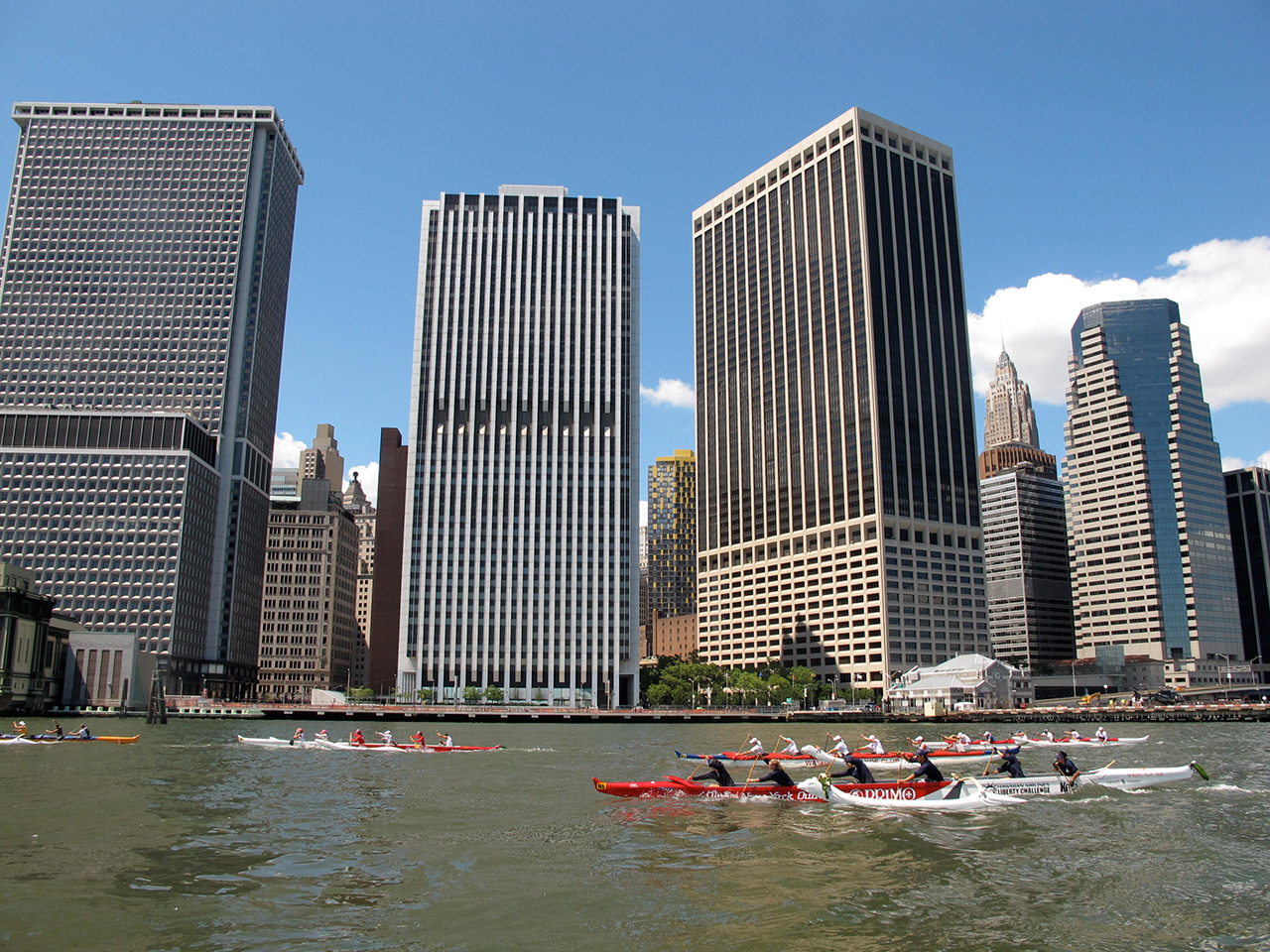 “It’s extremely complex what they do there in New York City,” he says. “And they actually have a free boathouse provided to them by the Hudson River Trust. That’s really unusual! It’s their love and their passion. They’re really good at what they do, and I’m very proud of them.

“Aloha exists everywhere. Sponsoring these events helps us to highlight these relationships that people have created.”

“New York is such a crazy, transient melting pot,” he says. “I always find it interesting who’s in your boat and the stories each person brings along. You can be in a boat that has, in seat one, a guy from Hawaii, seat two, a girl from Kansas, seat three, a guy from Queens, New York, seat four, a guy from Southern California, seat five, a Kiwi from New Zealand, and seat six, a Panamanian straight from Central America. And that’s pretty much every time. You just meet really cool people.

“And they all have a sense of ohana,” he says. “That sense of community. They probably refer to it differently, but it’s there.”

Paddling in New York has its differences from Hawaii, too. Like dodging commercial boat traffic, tugboats, recreational watercraft, and jet skiers. They don’t stop for canoes. And then there’s the tidal currents.

“You can be in the canoe and doing a mile or a mile and a half or two miles per hour,” explains NYO President Brent Beck, “and then turn around and be going with the current and doing nine or ten miles per hour. It’s a pretty active experience.”

“For people who live in the city and deal with the crazy hustle and bustle of New York,” he says, “it’s a really rare opportunity to get away from everyone else, and have some isolation and find some peace and tranquility in what is otherwise a very hectic environment.”

It’s that peace and tranquility—at least once you get past all that boat traffic—that seems to draw a lot of people from Hawaii to paddle. Including Beck, who works in Manhattan as an attorney. He grew up in Hawaii Kai and Kahala and graduated from Mid-Pacific Institute in Honolulu.

There’s something really special about meeting on the dock; waterside. Getting all these New Yorkers out of the concrete jungle and into a different mindset.

He talks about the Polynesian festival they always have on the day of the Liberty Challenge. It’s one of the largest Polynesian festivals on the East Coast and has music, dancing, family activities, and food. There’s some Maori, Tahitian, and other Polynesian culture represented, but mostly it features the Hawaiian culture, and a lot of people from Hawaii come to experience it.

“It’s fulfilling to get that connection here,” he says. “There’s definitely a really large Hawaii contingent in New York and they usually come out.”

The Liberty Challenge offers three race heats: a women’s race at 7:30 a.m., a men’s race at 11 a.m., and a mixed gender race at 2:30 p.m. They are spread throughout the day because there aren’t enough available outrigger canoes on the East Coast to have the races concurrently.

The focus at NYO is less about race scores and more about outreach. After California’s Newport Aquatic Center entered a team called Makapo Aquatics in last year’s Liberty Challenge, NYO was flooded with requests from the visually impaired and disabled communities to start up a similar team. Makapo means “blind” in Hawaiian, and the California team consisted of three blind and three sighted paddlers. NYO recently went to Newport Beach to learn how to start a similar team.

The club also takes people out onto the water for free and shows them a little of New York. “It’s like a tour,” says Gurney. “We paddle them around with the idea to get them to join, and to fall in love with Outrigger and New York.” The nonprofit club is run entirely by volunteers. 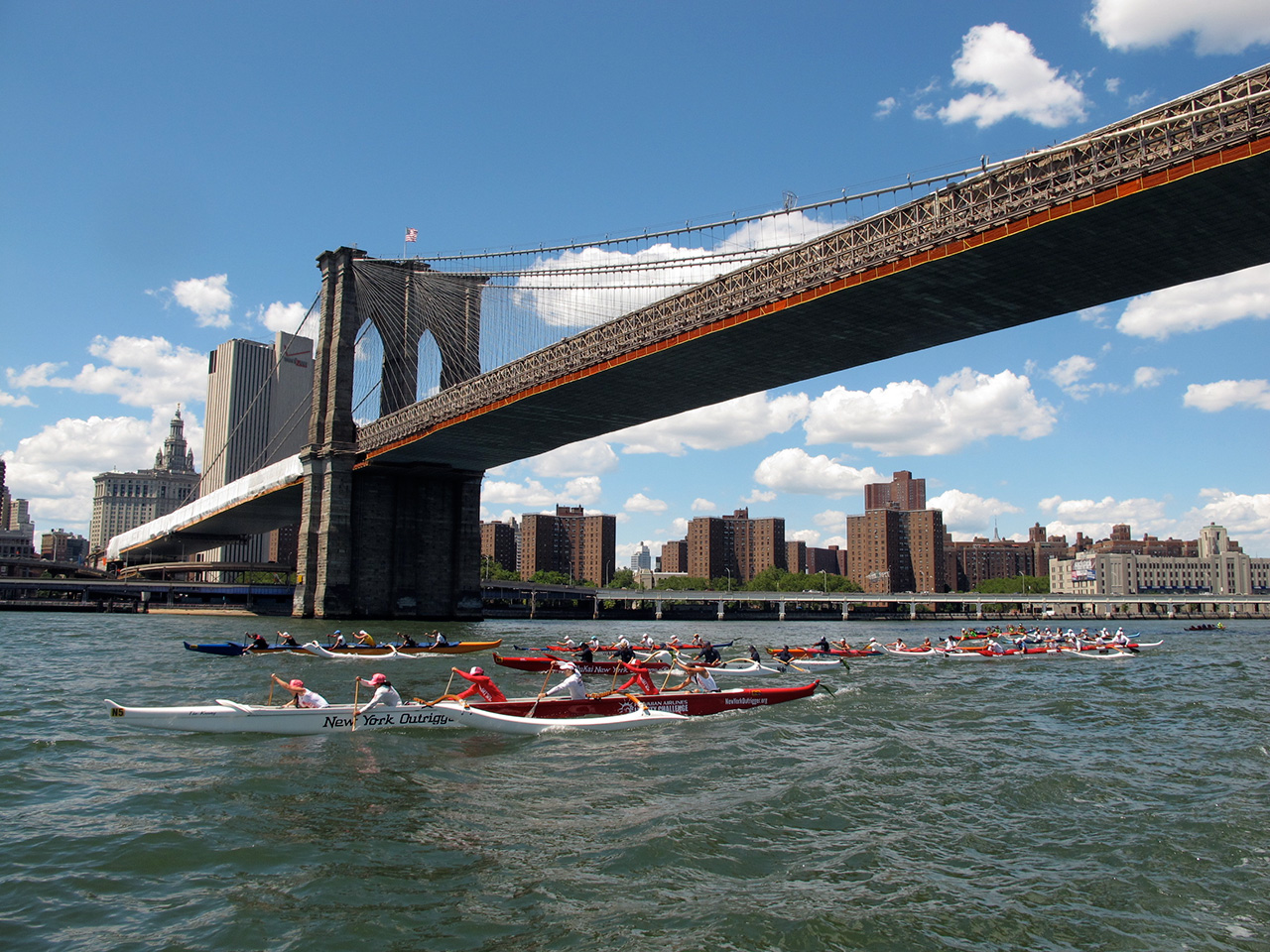 Jason Ng is another one of the volunteers, and another Hawaii transplant who misses home. He graduated from Honolulu’s McKinley High School, and now works in New York City at a financial software company. He runs NYO’s free Novice program for the public to come and experience paddling, and well as the club’s Growth program, where anyone from novices to veterans train together, focusing on the core basics.

He, too, talks about finding a Hawaiian-style ohana in the paddlers who work so closely together. “People are wonderful in the city, and obviously there are lots of examples of community. But there’s something really special about meeting on the dock; waterside. Getting all these New Yorkers out of the concrete jungle and into a different mindset.

“The spirit’s there. You see the sun go down, you’re there in the canoe and it’s teamwork with our fellow paddlers. It’s incredible how many things translate across the distance. Everyone’s just enjoying each other. There’s the same spirit of ohana. The same spirit of aloha.”

Even more so, he says, at race time. He says every year they get more Hawaii clubs and other groups from around the country asking about the Liberty Challenge.

“The growth in participation speaks to how universally translatable this sport and this culture is,” he says. “It’s great seeing everybody come together that week from different places. From France, and South America, and the guys from California. It’s just great seeing that kind of confluence, that kind of influence. It’s very rewarding.”