Above: The Napali Coast is situated on the northwest side of the island of Kauai. Photo: Kawika Lopez


Napali is considered the jewel of Kauai, its emerald cliffs rising above the island’s northwest shore. In Hawaiian, Napali means “the cliffs” and it’s estimated the 17-mile coastline is about five million years old, the result of volcanic eruptions. The now razor-sharp cliffs were created by strong winds, rain and crashing waves. Its numerous valleys were home to thousands of Native Hawaiians centuries ago and today the towering coastline is a remote, nature-lover’s dream destination. 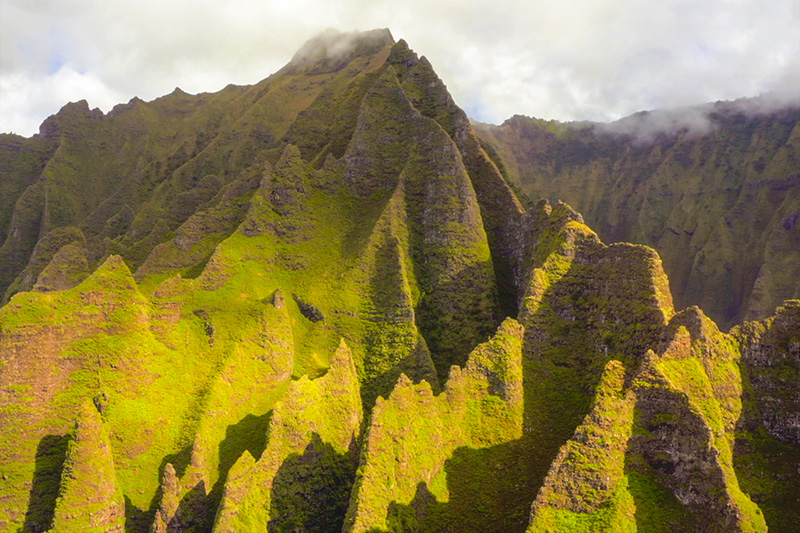 Above: The cliffs rise as high as 4,000 feet ending abruptly at the sea. Photo: Kawika Lopez


How to see Napali

Note: Tour operators offer morning and afternoon tours, but afternoon tours are only available typically from June through September because of the large wintertime waves.

There are only three ways to see the Napali coast: by air, by sea or on foot via the 11-mile, one-way Kalalau Trail. (Currently, the Nāpali Coast State Wilderness Park, where the Kalalau Trail is located, is closed because of earlier flood damage.)

For a fun, immersive experience of the storied coastline, I opt for a boat tour. Not only could I get up-close to Napali ’s 4,000-foot tall cliffs, but I also snorkel off shore, explore hidden sea caves and see dolphins and honu, or Hawaiian green sea turtles. We make sure to keep our distance, though, as sea turtles, monk seals, whales and dolphins are protected under federal and state laws.

Our boat cruises out of Kikialoa Harbor in Waimea, before picking up speed as we sidle up to Napali . The coastline transforms from expansive white sand beaches to soaring cliffs in shades of jade and copper.

These views make me catch my breath. But in addition to the stunning coast, I remember I’m on a boat and there’s plenty to see in the azure sea. Napali is home to pods of naia or spinner dolphins. Early on our tour, our captain spots them jumping in the distance. Soon these friendly animals are leaping alongside us. I also saw a honu bobbing peacefully at the surface.

Napali has one of the best snorkeling spots on Kauai, and it’s only accessible by boat. Just offshore of a beach called Nualolo Kai is a protected reef. The reef is teeming with marine life, which once sustained a Native Hawaiian village. In fact, remnants of traditional housing structures and a heiau, or temple still exist. (Some boat operators have a special license allowing participants to land on Nualolo Kai beach; check with the operator in advance. While it’s a secluded, special place to visit, be respectful of the space.) 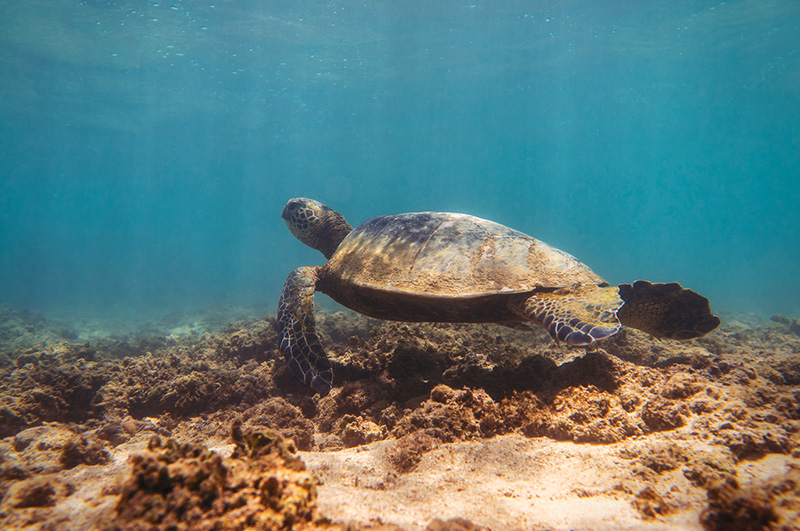 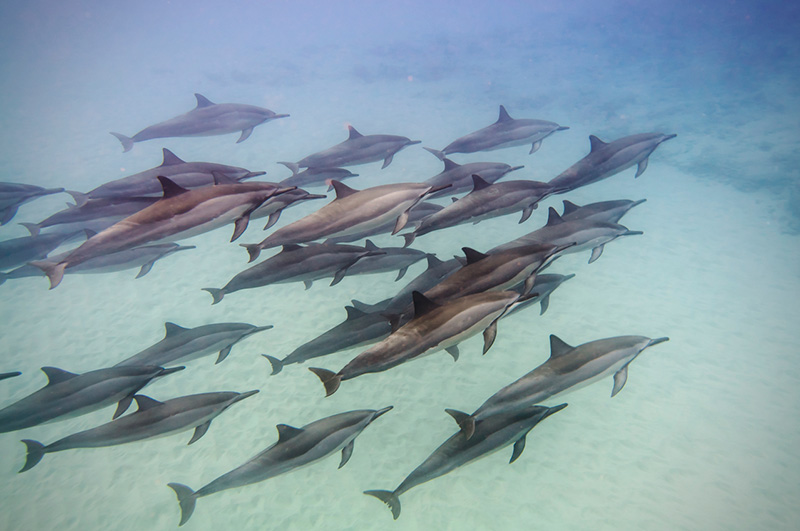 Above: Hawaiian spinner dolphins, or naia, forage offshore for food at night and can often be seen during daylight hours relaxing in shallower waters. Photo: Kawika Lopez


Another highlight of touring Napali by boat is exploring its sea caves. There are five navigable sea caves along the 17-mile coastline. My favorite is nicknamed Open Ceiling Cave and is one of the largest and most spectacular. This cave is appropriately named as the large hollowed out lava tube has a collapsed roof, which created a large, natural skylight. Further up the coastline is another fun sea cave. Our captain glided the boat into a smaller cave, dubbed the Honeymooners Sea Cave. This one features a waterfall cascading about 100-feet down the cave’s right wall. There is even a small, white sand beach at the back, giving the sea cave a romantic atmosphere. And because the Honeymooners sea cave faces true west, it’s been reported that at certain times of year in late afternoons the sunset turns the cave orange as it reflects off the water, making the spot even more idyllic. 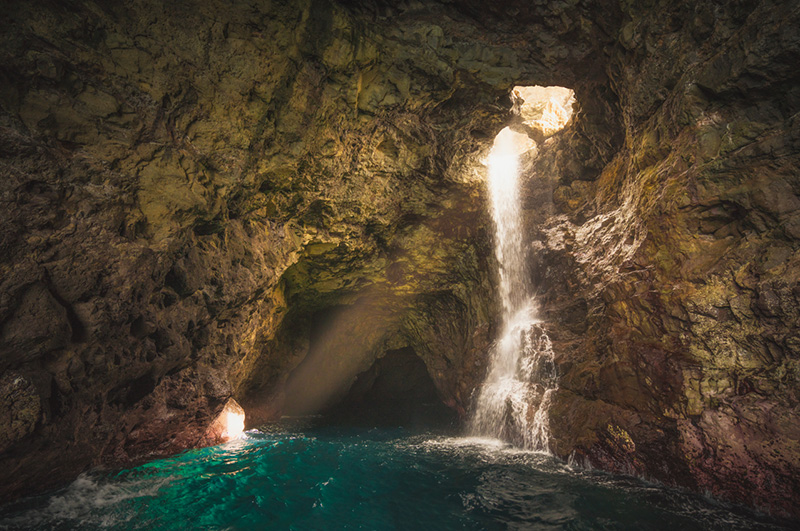 Above: The Double Door Cave is a feast for the senses complete with a cascading waterfall. Photo: Kawika Lopez


We near the end of the coastline as the isolated Honopu and Kalalau beaches appear. A dramatic natural rock wall separates the two beaches. In the middle is a 65-foot tall arch, under which you can walk. Hawaiian lore suggests the valley behind might have been home to the elusive menehune, or mythical little people. The beach is also a favorite film spot of Hollywood. It’s appeared in the original “King Kong,” “Six Days Seven Nights” and the James Bond movie, “The Man With the Golden Gun,” in which a helicopter flew through the arch. 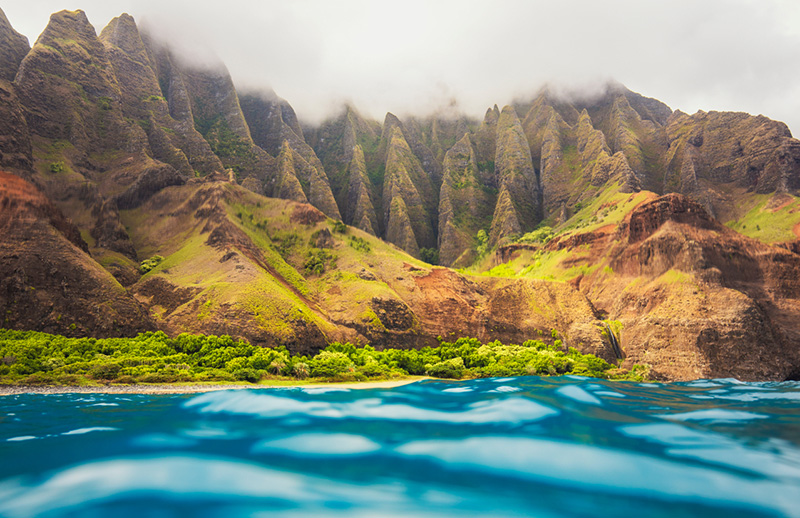 Above: The remote Kalalau Valley was once home to hundreds of Native Hawaiians. Photo: Jay Greiner


Next to Honopu is Kalalau Beach. At about two miles wide, Kalalau is the biggest valley along Napali. The valley was home to hundreds of Native Hawaiians. Today, it marks the end of the grueling 11-mile Kalalau Trail and its powdery, white sand beaches offer solitude and serenity in one of the most scenic places in Hawaii.