Above: Always a popular treat, Matsumoto's Shave Ice in Haleiwa is known for its extra fine shaved ice that instantly melts in your mouth.

Ice drizzled with rainbow-bright syrups. As far as frozen treats go, shave ice in the Islands is delightfully simple. It’s an iconic food enjoyed by Hawaii locals year round, and a must try for visitors. Even former president Barack Obama and his family made sure to get shave ice each time they visited Oahu.

Other cultures have similar versions of ice blanketed in syrup—halo-halo in the Philippines, bao bing in China, patbingsu in Korea—but shave ice in the Islands can trace its roots back to Hawaii’s storied plantation past. Japanese immigrants, who came to the Islands to work in the sugar and pineapple fields in the mid-1800s, introduced the concept of kakigori. Meaning shaved ice, kakigori grew in popularly from the seventh and ninth centuries A.D. To cool off, Japanese immigrants in Hawaii used their tools to shave flakes off large blocks of ice, and then coated it with sugar or fruit juice. In Pidgin vernacular, the refreshing treat became known as shave ice—not shaved ice. (On Hawaii Island, it’s also called ice shave.) 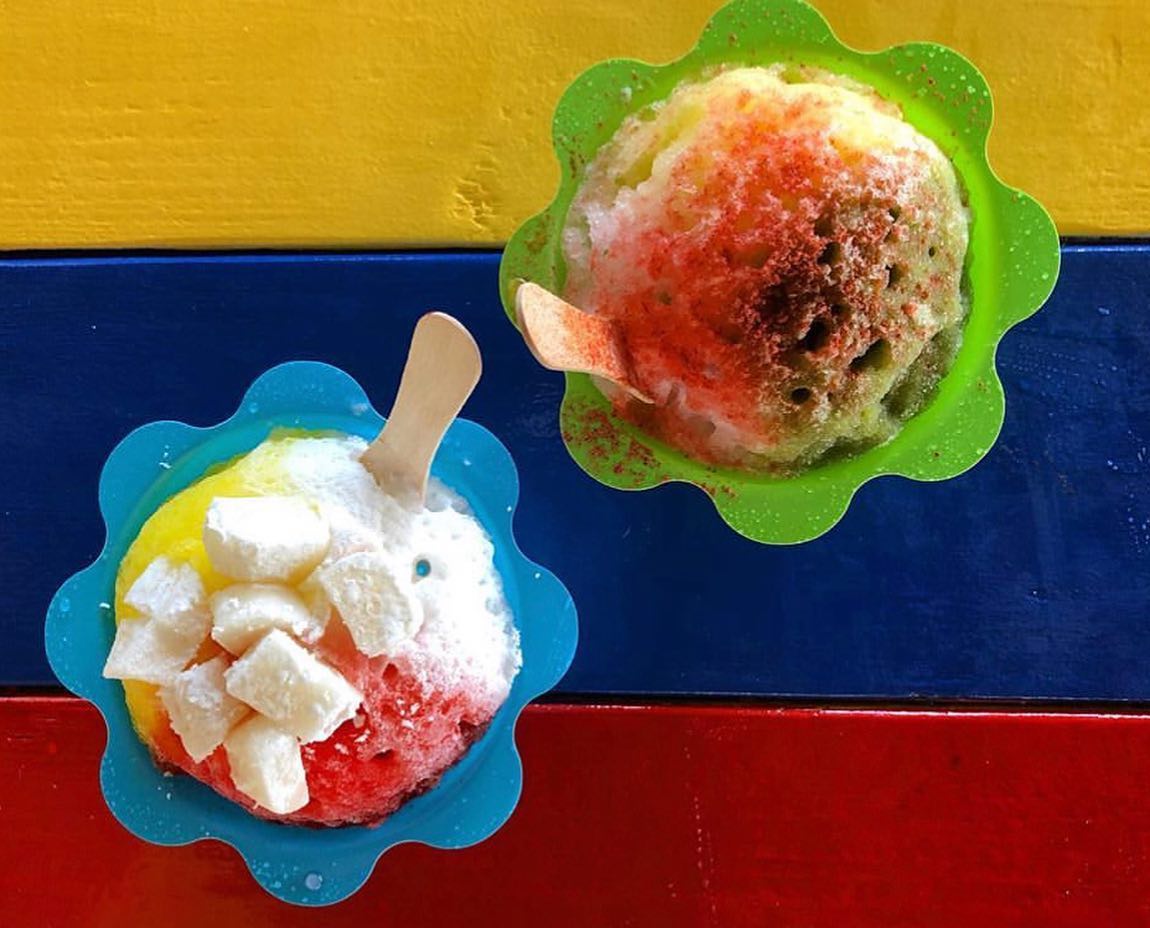 Above: Half the fun is in the toppings! Shave ice with mochi and li hing powder from Ululani's Shave Ice on Maui. 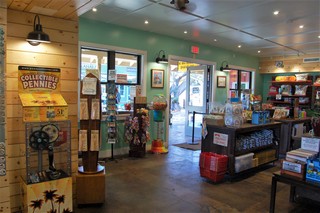 After they finished working on the plantations, some families opened small general stores in the surrounding communities, where they sold groceries, household items and even shave ice. One particular shave ice shop, Matsumoto’s Shave Ice, originally opened in 1951 as such, before becoming one of the most renowned shave ice places on Oahu’s famed North Shore. Owner Stan Matsumoto says his parents, Helen and Mamoru, started selling shave ice as an added value treat for customers. It was a hit with both locals and visitors, especially traveling surfers who came to Oahu’s North Shore for its legendary waves. Matsumoto’s is still very popular today. On a busy day, the shop sells more than 1,000 shave ice treats.

Shave ice joints like Matsumoto’s have the art of crafting the perfect shave ice down to a science. Unlike snow cones on the continental U.S., shave ice is made with finely shaved, not crushed, ice. This results in a powdery, fine consistency, like freshly fallen snow. The flakes were traditionally made with hand-cranked machines; some stores still operate them. The shave ice is then softly mounded in a cup, or sometimes a cone, and generously drizzled with colorful syrups, either artificially or naturally flavored. The flavor combinations are seemingly endless from traditional fruits such as pineapple, strawberry, mango and more, to the inventive like piña colada, vanilla cake and green tea. These days, many shave ice places offer all-natural syrups made from fruit, often locally sourced. In some ways, these businesses have gone back to shave ice’s plantation roots with the fruit syrups. 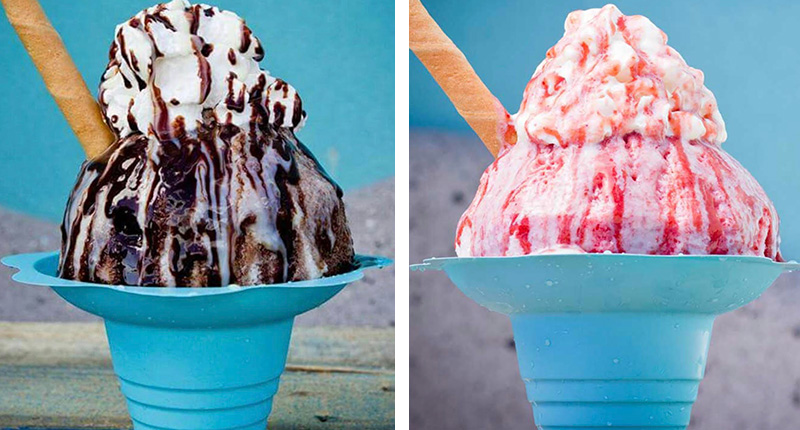 Although shave ice is a straightforward treat, it’s also one of the most versatile. A look at any Hawaii shave ice menu demonstrates that while the standard ice and syrup combination is refreshing, shave ice with the extra goodies is even better. Like shave ice itself, one of the first supplements also came from Japan. Azuki beans—Japanese red beans boiled with sugar and pressed into a sweet paste—were one of the first shave-ice “extras” and are added to the bottom for a bottom-of-the-bowl sugar rush. Other popular toppings include vanilla ice cream, mochi balls, fresh fruit, li hing powder and a “snowcap” of sweetened condensed milk.

Today, there are dozens of shave ice places across the Islands. There are traditional, family operated shops such as Matsumoto’s and Aoki’s Shave Ice, both located on Oahu’s North Shore, to places that serve shave ice saturated with all-natural fruit syrups such as the Fresh Shave on Kauai or Uncle Clay’s House of Pure Aloha in east Oahu. Some places serve shave ice out of food trucks, like Wailua Shave Ice in Kauai or the Original Big Island Shave Ice Co. on Hawaii Island.

No matter where you go for this sweet treat, you're sure to enjoy this colorful confection that will cool you off on a warm, sunny day. Shave ice - it's just another local thing to love about Hawaii.