Above: A flight from Beer Lab HI gives you an opportunity to sample several different variations and flavors.

Hawaii has long been home of the tropical cocktail, but in the past few years a booze rebirth has taken place in the Islands. Move over Mai Tai, craft beer now reigns supreme. The island is quickly, and finally, catching up to the Mainland when it comes to quality, locally made beer.

On Oahu, the hip, evolving neighborhood of Kakaako has become the island’s craft brew hub; there are three brewpubs—breweries plus restaurants—all within walking distance of each other. But you can also find quality beer in the heart of Waikiki, and taprooms—a beer tasting establishment—near the University of Hawaii campus in Moiliili and in Kailua on Oahu’s windward side. And Oahu isn’t the only island churning out quality suds. Even better, there are dozens of local bars and restaurants (even grocery stores) selling these brewed-in-Hawaii beers. Here’s where to go to drink a pint or two of quality craft beer, direct from the source. 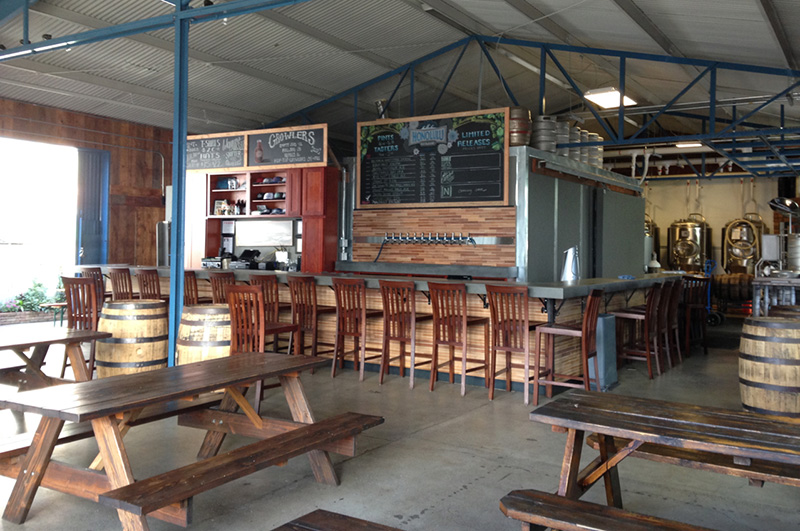 Above: Enjoy this casual environment for high-end beers at Honolulu Beerworks in Kakaako.

When it comes to craft breweries on Oahu, Honolulu Beerworks has been leading the charge. Located in a converted warehouse in Kakaako, the five-year-old brewpub is owned by husband and wife Geoff and Charmayne Seideman. Honolulu Beerworks has 14 beers on tap, in addition to creative limited releases. There’s the Pia Mahiai saison, made with locally grown oranges, tangerines, lemons, limes, lemongrass and Big Island honey and the popular Sheltered Bay IPA, a Pacific Northwest style IPA. Order the smoked ahi dip with locally made crispy baguette slices and the Bavarian soft pretzels with beer cheese fondue; they provide the perfect carbs to go along with your beer. Honolulu Beerworks has become a popular spot on the weekends, and with its communal seating, the open-air brewpub is a great place to talk craft beer and make new friends. 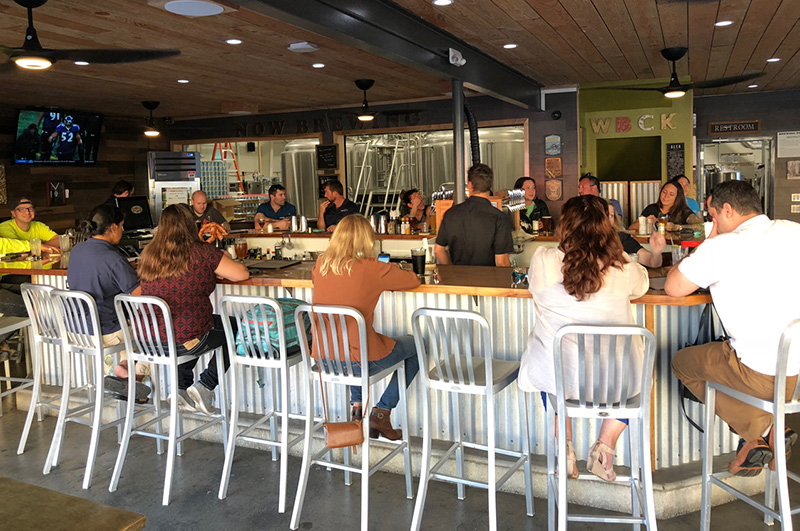 Above: This hot spot, Waikiki Brewing Company, is the perfect place to quench your thirst and dine with friends.

Not on Oahu? The Neighbor Islands boast quality beers, too.

The talented people at Waikiki Brewing
Company have the meaning of brewpub
down. Not only does this place make quality
craft beer, but it also serves ono (delicious)
food. Waikiki Brewing Company opened in
2015 in the heart of Waikiki on Kalakaua
Avenue, hence its name. And in 2017, a
second location opened in Kakaako on
Queen Street. Joe Lorenzen is the brew-
master of Waikiki Brewing and opened the
first brewpub after inquiring about a
vacancy adjacent to Cheeseburger Waikiki.
(Lorenzen is the former general manager of
Cheeseburger Restaurants.) Waikiki
Brewing Company has nine beers on tap,
such as the Skinny Jeans IPA and the Hana
Hou Hefe, in which sweet orange peel and
strawberry puree are added before fermen-
tation. Waikiki Brewing also cans its beers,
so you can buy a six-pack at the bar to enjoy
later. You can also get them in grocery
stores throughout the state. Each brewpub
has different food offerings, but the
Kakaako one is where the food menu really
shines. The Kakaako location smokes all its
meat in-house in a food truck on the
property using kiawe wood. This results in
tender beef brisket, herb-crusted chicken,
smoked bratwurst and pulled pork. It’s a
beer and barbecue lover’s dream come true. 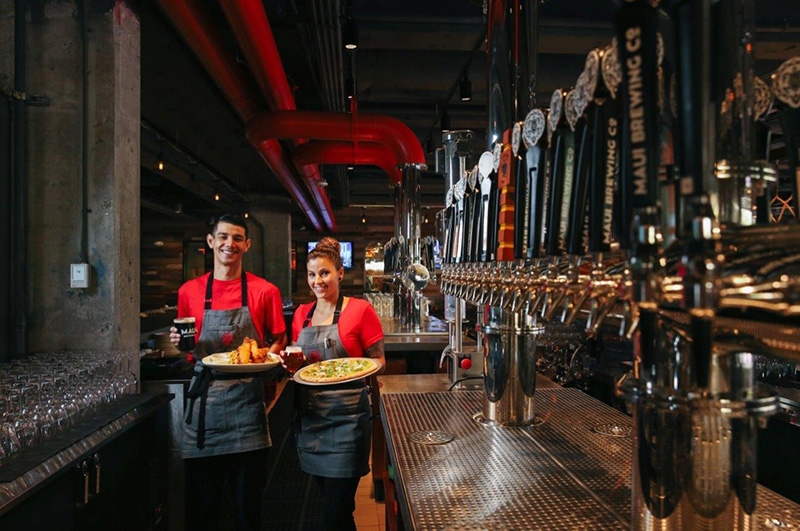 Above: Maui Brewing Co. serves it up right with a tasty selection of beers and food, including the Brewmaster pizza.

Beer drinkers across Oahu were ecstatic when longtime local craft beer favorite Maui Brewing Co. announced they were opening up shop on the island. The Lahaina-headquartered company brews up 50 types of quality, locally made beer each year. You can find the brand’s flagship brews in local grocery shows and restaurants, so to imbibe Maui Brewing’s limited release drafts you can’t find elsewhere, visit the brewpub. Plus, the food is a great accompaniment. The Waikiki location is on the second floor of the Holiday Inn Resort Waikiki Beachcomber. It’s an impressive 18,000 square-feet and can seat more than 400 people. Maui Brewing strives to source local ingredients for its beer and food, including the Brewmaster pizza made with Kukui sausage, pepperoni, bell peppers and olives and the pork belly bao with Waianae pork, kimchi cucumber, house-made bao and plum sauce. More good news? There's also a second Oahu location in Kailua. 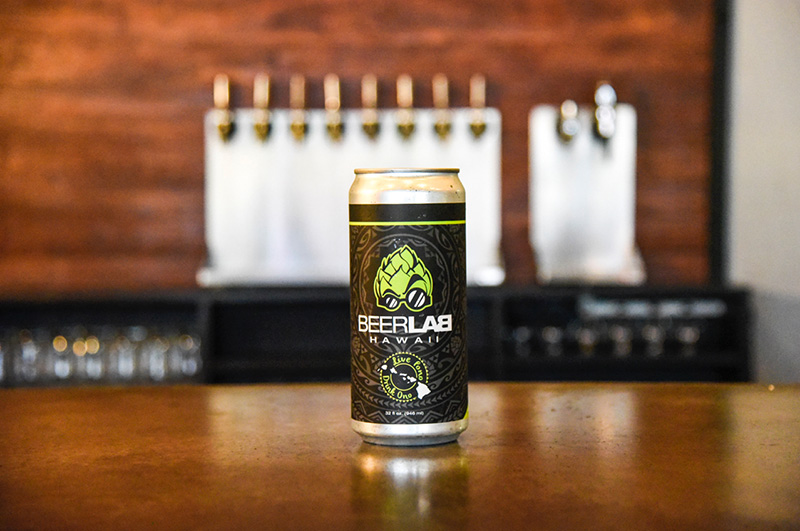 Above: Good things are brewing in the Beer Lab, where they introduce one new beer each week.

Beer Lab HI is small-batch brewery, but what it lacks in brewing capacity, it more than makes up for in innovation. Even better, there are three taprooms across the island. The original taproom, located on University Avenue, is less than half a mile from the University of Hawaii campus, but Beer Lab HI also has locations in Waipio, on Oahu’s West side, and in Aiea in Pearlridge Center Uptown. Since it opened in 2016, Beer Lab HI has cultivated a reputation for experimental beers made with specialty ingredients. Take for example, The Truth, a pale ale fermented with 100 percent brettanomyces, a special yeast. Beer Lab HI is owned by Nick Wong, Derek Taguchi and Kevin Teruya, who work as nuclear engineers at Pearl Harbor, which might explain the brewery’s scientific bent with its beers. Beer Lab releases new beers frequently, so follow them on Instagram to see what they’re brewing up next. 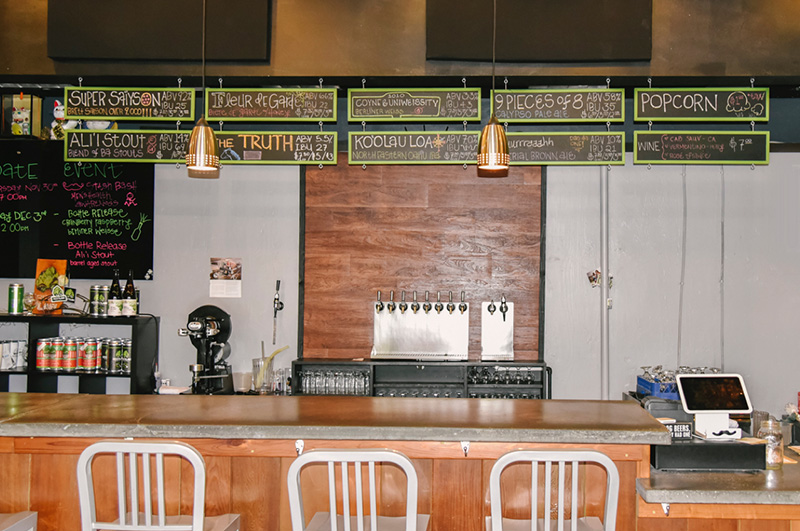 Above: Unique flavors made with specialty ingredients make the Beer Lab HI a popular place for beer connoisseurs. 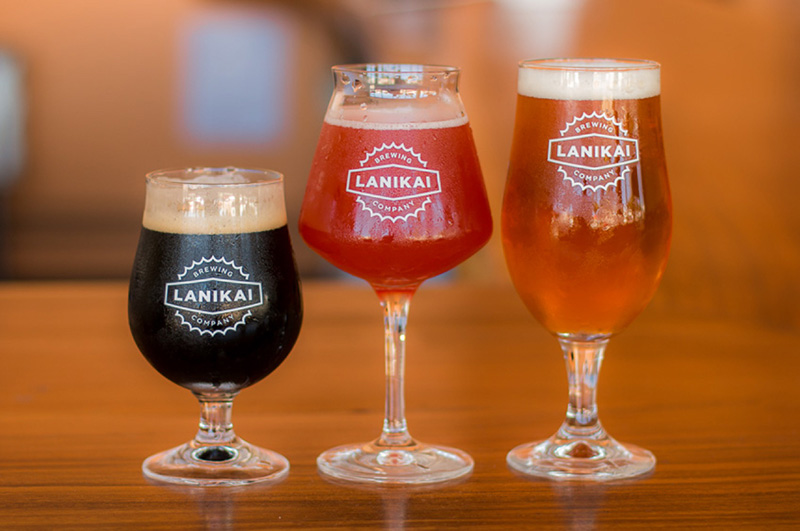 Lanikai Brewing Company put Kailua on the map when it came to brewed-on-Oahu beers. With friendly bartenders ready to fill up your glass, the taproom is relaxed spot to try a new beer, and likely learn a thing or two about beer making in the process. Like most other craft brewers, Lanikai’s IPA is one of the most popular; its Moku Imperial IPA is made with pikake flowers. But brewmaster Steve Haumschild says the brewery’s sour beers have a loyal following, too. Its Rubbah Slippah Yuzu sour recently won a silver Best of Craft Beer award at the annual Oregon event. The beers are made with locally inspired ingredients such as hibiscus, local honey, macadamia nuts, papaya, pineapple, ti root, ulu, taro, mango and more. Lanikai Brewing doesn’t have a food menu, but the taproom is BYO food friendly. 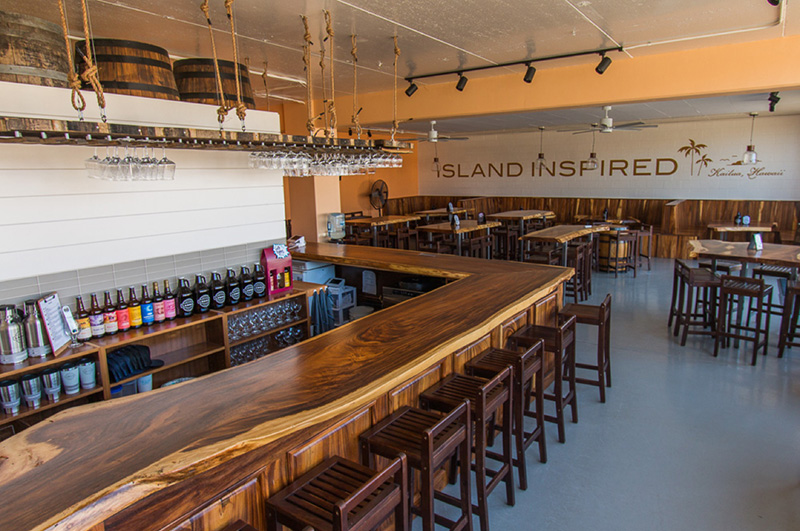 Above: An inviting setting at the Lanikai Brewing Company taproom welcomes you to sit down and savor the flavors. 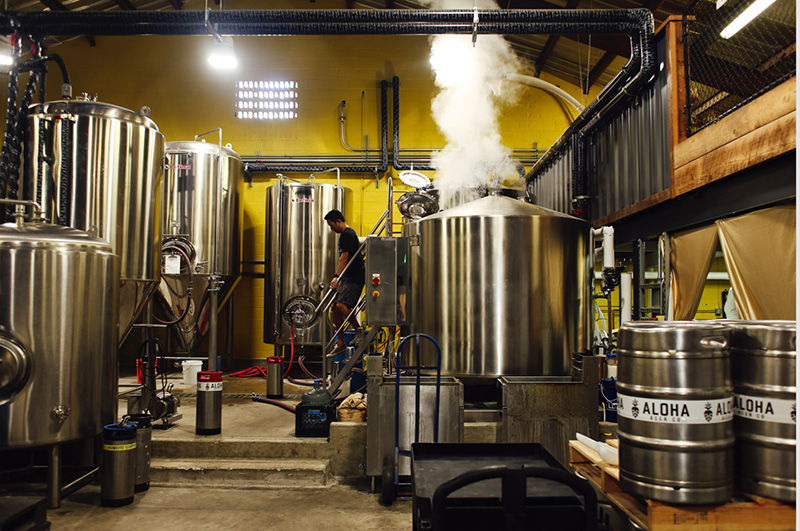 Above: The Aloha Beer Co. distillery churns out eleven beers on draft and offers an excellent food selection.

For many locals, cruising with friends and family in their garage and drinking a cold one is a beloved Hawaii pastime. Aloha Beer Co. incorporated this island tradition into its Kakaako brewery, which opened in 2017. There are different seating areas, including the casual outdoor area—reminiscent of a garage space—the industrial indoor taproom and upstairs area, complete with its own speakeasy-style secret entrance. Steve Sombrero founded the brewery with veteran Hawaii brewmaster Dave Campbell. Aloha Beer Co. has 12 beers on draft, such as the Hop Lei IPA, Waimanalo Farmhouse and Portlock Porter. Come hungry because Aloha Beer Co. serves hearty sandwiches, including pulled pork and bratwurst, each made with Pono Pork and served with locally made condiments on toasted buns. 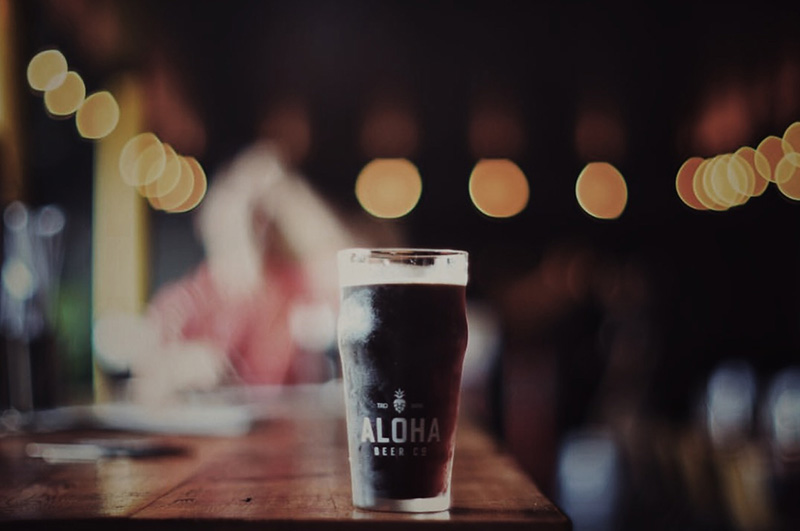 Above: Feeling thirsty? The casual outdoor setting at Aloha Beer Co. in Kakaako is the perfect place to enjoy a cold one.