It’s summer year-round in Hawaii, meaning any time is a good time to keep cool in a pool. These resorts’ aquatic attractions up the Fun Factor with features, activities and amenities that amaze and delight.

Disney magic beckons at Waikolohe (“mischievous water”) Valley: Think dramatic lava formations, misty grottoes, steaming hot springs, three pools, four slides and a river on which you can either peacefully drift in a tube or ride rapids that wind through caverns. At the Rainbow Reef, a saltwater lagoon, you’ll have a blast snorkeling amid thousands of brightly colored fish. Keiki (kids) will love frolicking in jets of water at the Splash Zone, designed to resemble a tide pool, while Menehune Bridge keeps the littlest ones occupied with two slides, a climbing structure and interactive water elements. 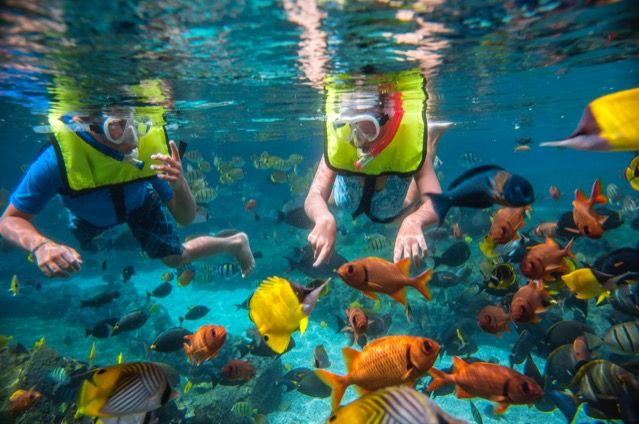 Helumoa Playground offers two pools, two whirlpools, a water slide and a fountain play area for kids, all right beside the ocean and Waikiki Beach. There are 17 in-water chaise lounges (yes, the chairs are actually set in the pools) and a hut where you can buy pool toys and inflatable flotation devices. Midday, Tuesday through Saturday in June, July and August, Citrine the mermaid, Tinker Fairy, Spider Super Hero, Polynesian Princess, Polynesian Warrior or some other costumed character entertains children with storytelling, games and tricks. Be sure you have a camera ready for fabulous photo ops! 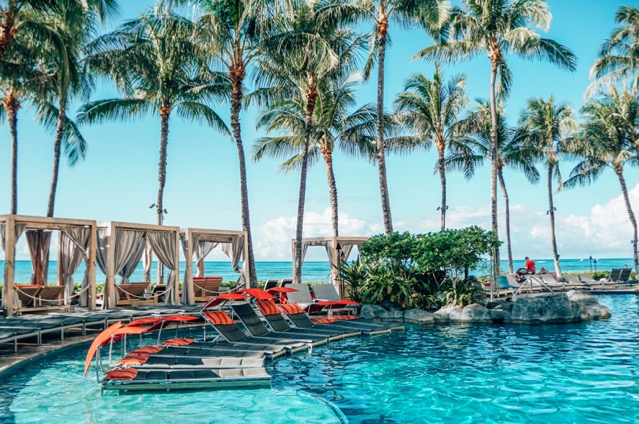 Wailea Canyon, part of an elaborate 25,700-square-foot water park, boasts a swim-up bar, three Jacuzzis, six waterfalls, four pools on three different levels and five intertwining slides. Thrill seekers can glide down the 262-foot Lava Tube Slide, which includes a 360-degree loop in a breathtaking 14 seconds. Don’t miss the chance to ride the world’s only water elevator, a cylinder-shaped chamber that’s open at the top and concealed in a “volcano.” You’ll sit on a tube that rises and descends 32 feet (about three stories) via water that’s pumped into and out of the chamber. 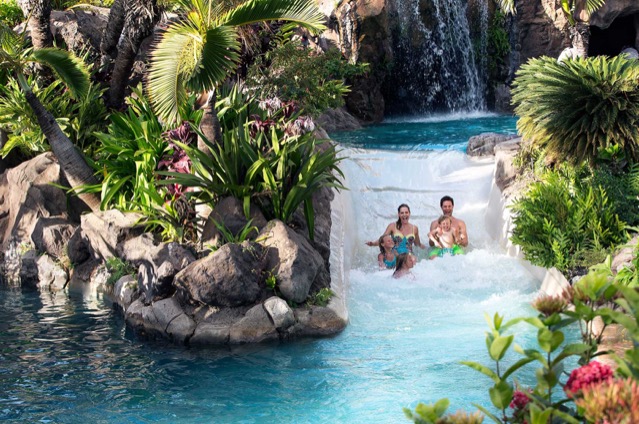 The two main pools are connected by a cave that’s hidden between two waterfalls. Walk or swim to the Grotto Bar there for light pub fare as well as creative libations, including frozen cocktails. A separate keiki pool has two slides, spouting turtle statues, a dolphin statue upon which kids can perch and an adjacent splash pad. Inner tubes, inflatable rafts and other pool toys can be purchased poolside. Have you ever wondered what it’d be like to be a mermaid? Satisfy your curiosity at an experience that includes games, stories and swimming wearing a mermaid’s tail. 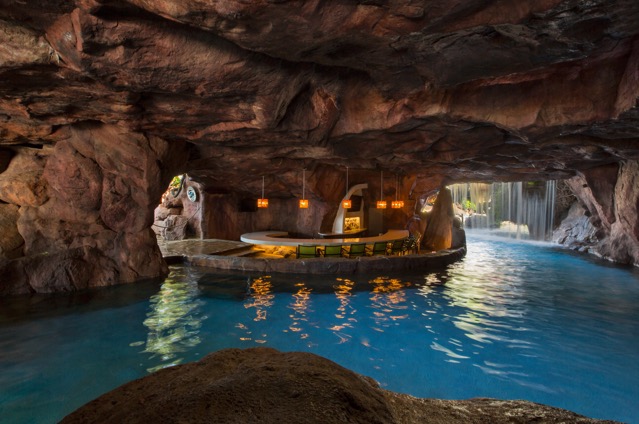 Above: Grotto Bar at Hyatt Regency Maui Resort and Spa

Features at the multilevel, 3.5-acre, heated Super Pool include slides, Jacuzzis, a grotto that’s accessed through a waterfall, water volleyball and basketball, and live music (performers are on a stage in the middle of the pool). Awaiting kids at the Discovery Cove are a sandy beach and a sailing ship that’s bordered by a water-spraying palm tree, whale’s tail, turtles and cannons. Pool attendants surprise guests with complimentary refreshments, and the Ambassador of Aloha is always happy to “talk story” (look for the smiling guy wearing shorts, an aloha shirt and a kukui nut lei). 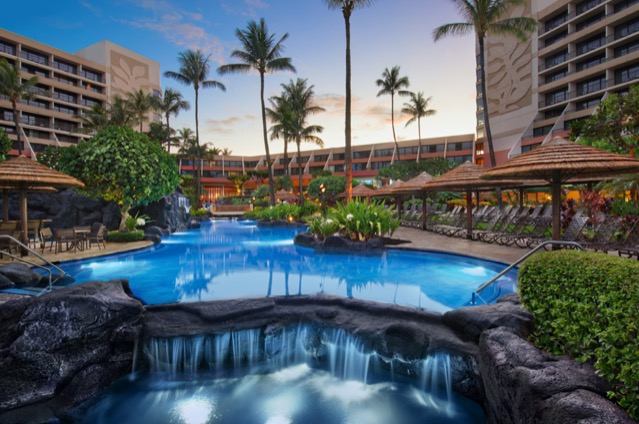 Just steps from Kaanapali Beach, this pool is longer than a football field and has two swimming areas connected by a river. You can float on a bean bag between them, past waterfalls and tropical trees, plants and flowers. Families congregate at one end, which includes a slide and shallow section for children. The other end, with cabanas and a bar, is geared to adults. Located between the pool and the beach, the Cliff Dive Grill provides prime seats for the sunset torch-lighting and cliff dive ceremony at the promontory called Puu Kekaa (Black Rock). 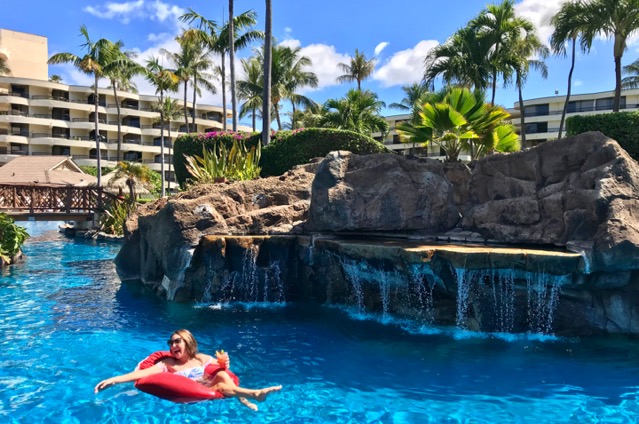 Above: Sheraton Maui Resort and Spa

The two-acre Nalu Adventure Pool offers a swim-through grotto, four slides (one is 325 feet with a five-and-a-half-story drop) and a food truck selling local favorites such as smoothies, chili dogs and kalua pork with pineapple cabbage slaw. Two Nalu Luxury Cabanas are perfect hideaways for families and small groups of friends. Among their amenities: fresh fruits, trail mix, assorted jelly beans and a refrigerator stocked with juices, bottled water and soft drinks. At the adults-only infinity-edge Maluhia Serenity Pool, six over-water cabanas are popular for romantic dinners with sunset and the Pacific Ocean as the backdrop. 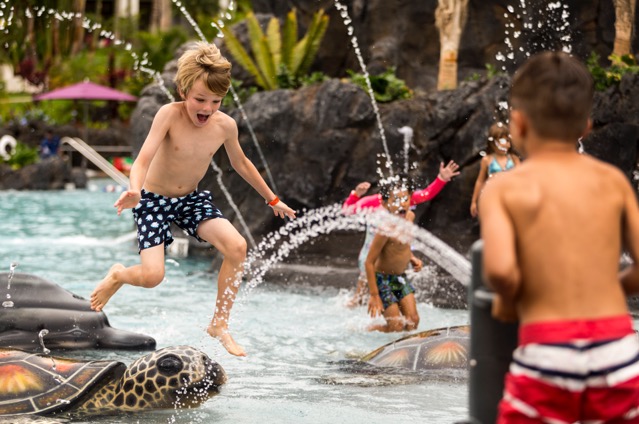 Above: Kids in the pool, Wailea Beach Resort – Marriott, Maui 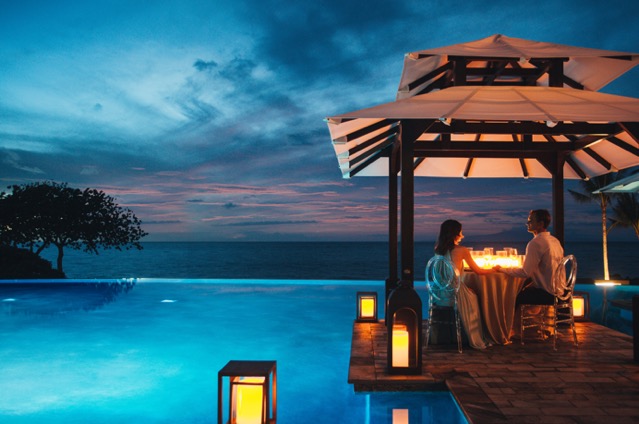 King’s Pond, a 4.2 million-gallon aquarium carved from lava rock, is home to more than 75 species of fish—including tangs, wrasses, snappers and butterflyfish—and Kainalu, a spotted eagle ray that has lived there since the hotel opened in 1996. You can swim, snorkel or snuba (a combination of snorkeling and scuba diving) among those 4,000 fascinating residents plus learn about and feed them during a one-hour private tour with a marine naturalist. You’re also welcome to get acquainted with brittle stars, hermit crabs, sea slugs, sea urchins and sea cucumbers at the pond’s touch tank. 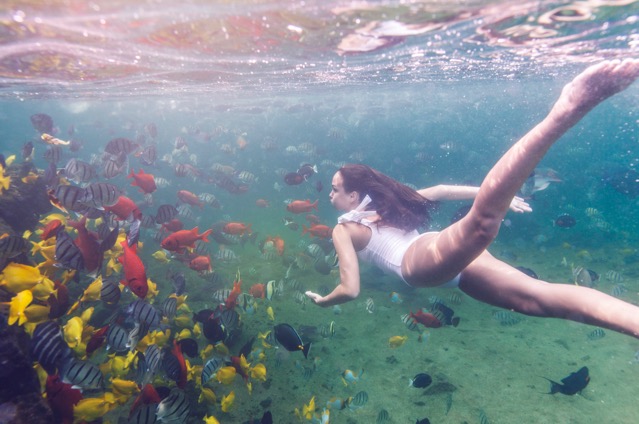 Kayak, snorkel, float on a stand-up paddle board and pedal an Aqua-Cycle Water Trike, a giant waterborne tricycle, in a four-acre saltwater lagoon populated by fish and turtles. The Kona Pool, one of three freshwater pools, offers a 175-foot slide and three hot tubs. One tub has a private waterfall and cabana; another is beneath a waterfall (you have to swim to get to it); and the third has a ramp and lift, making it accessible to those with disabilities. Keiki activities at the pool include scavenger hunts, bucketball games, checkers and volleyball tournaments. 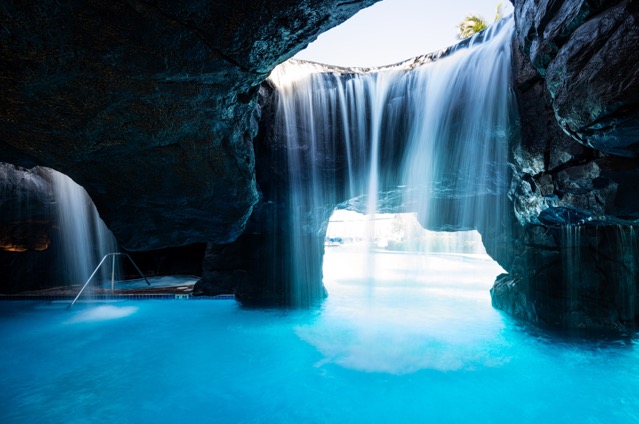 Multilevel pool pleasers include a winding lazy river, a 1.5-acre saltwater lagoon by the beach and a 150-foot slide with multiple S-turns. The VIP cabana beside the lagoon comes with a 42-inch flat-screen TV, a fruit plate, a snack basket, water and assorted juices, lunch and a round of cocktails or mocktails for four people. Relax in the quiet adults-only enclave or play a lively game of water volleyball or water basketball in the larger swimming area. During the summer and the week between Christmas and New Year’s, enjoy live music and slide races. 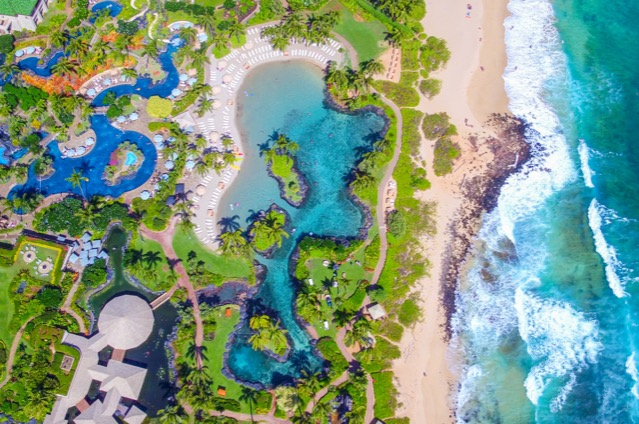 The saltwater main pool lures water babies with slides, cabanas, whirlpools and a swim-through/walk-through grotto. Saline water reputedly is gentle on the skin and eyes, has anti-stress properties and contains bromide, which alleviates joint and muscular pain. At the family lagoon pool, you’ll find a Jacuzzi, a children’s wading pond and splash pad, and firepits that are perfect for making S’mores. Even better, pick up provisions and have a party! The resort provides all the utensils to grill an ono (delicious) meal on one of the gas barbecues anytime the pool is open (5:30 a.m. to 10:30 p.m.) 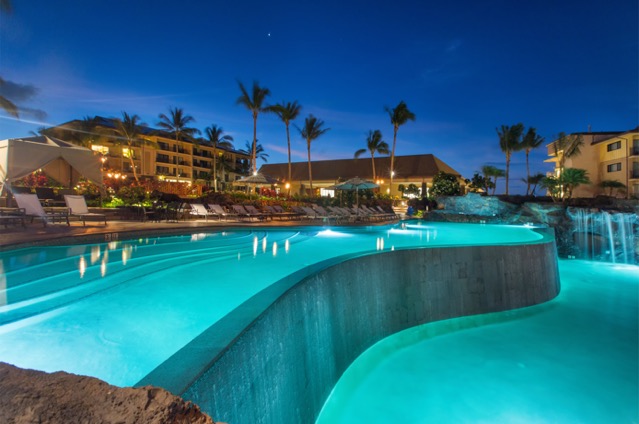